the beat goes on

Despite all corona measures ath the moment. We absolutely doing everything to keep your second home alive and open. Together with all covid measures related adaptations we came up with a full training airsoft experience in a competitive game way as many are used too.

We came up with 5 different training types for every field. The Vault, MeetQB, Aim , Dashville and the DTA Cinema and will feature the usual types like: Domination, Landlord, Dashflag, Hunter, Iaps , Hoist, TDM, Kill Confirmed.

We made up a set of basic rules, routes, and signing for you to make a safe and healthy game possible. See you soon at the Arena

HOW DOES IT WORK?

The CQB training consist out of 5 elements and fields which 2 of the elements are from the Dashmaster Tournament. (These will take 2×2 minutes.) The other 3 are skill centered training types of 4 minutes in a 1v1 or 2v2.

After arrival a 20 people group will be divided into 5 groups of 4 as covid says. Each group will be arranged to one of the 5 training areas.

After the game ends there will be a roulation of the groups to the next zone and will be mixed again to spice up the training.

Hereby we can guarantee a covid rule proof and safe experience.

Team Deathmatch : Get to know the map, look for angles and sneaky target lines. Kill or be killed.  Infinite respawns.

Capture the Flag: Domination – 10 houses have a Team A/Team B mechanical switch. The team that holds the most switches dominates and wins the match.

Hoist: Use your fresh map skills and take it up a notch.  Take your team flag to the center and raise it until the time runs out.Infinite respawns

Hunter : As a hunter you have one mission: “Kill the runner”. The runner’s mission is to shoot as many targets as he can in the given timeframe of 3 minutes. He only has 1 life.

Landlord : You forgot to pay the rent, now the landlord is coming to evict you. Push him back out by capturing as many capture points as you can. When the time has passed the one with the most captured points wins. Teams switch at the end of each game.

Meetqb : Get to the other side and try to avoid getting hit. Do not forget the clock.

DTA : Get some tactical and visual training under the hoofd by shooting at cinematic scene. A new airsoft training experience unline any other. So do you feel lucky ?

Covid is here to stay by now. As any Airsoft organisation and field we have to deal with it in our own unique and specific way. In the map above you can find, the walking direction, several points to find desinfectant, and restricted passways.

In the following section we will be explaining a bit more about the extra and general rules we have to keep an eye on in Dutch and the several icons you will find on the field for you to remind the rules we have been incorporating in our beloved Arena. 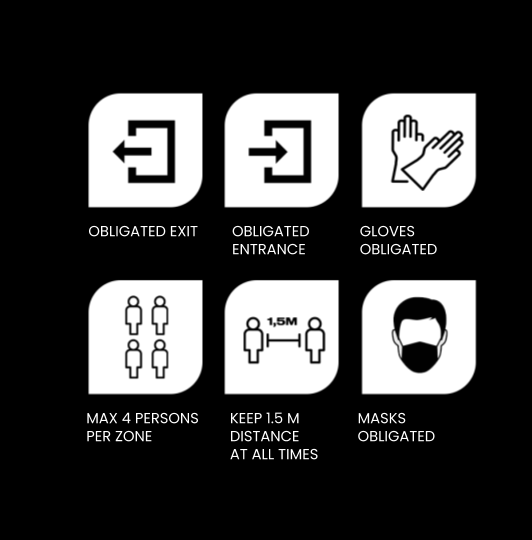 Come and taste some CQB game action at Realstrike arena.